The Blue Groper is not a real "groper" but is a member the wrasse family. The Blue Groper is usually found on exposed reefs to  about 40m deep. They range from Wilsons Promontory in Victoria up the east coast to around Hervey Bay in Queensland. At most dive sites in Sydney, the banging of two rocks together will usually attract a Blue Groper (he thinks you are getting him something to eat!).

The Blue Groper male is the big blue fish that we all know and regularly see. The males also have orange lines radiating from their eyes. Look closely next time you see a Blue Groper while diving and see if you can notice the lines. The females are smaller and range from a brown colour to a reddish brown; they may also have a series of pale blotches along the side of their body. Juveniles start out as a green colour and then change to the brown of the female. The fish also has very large lips. It grows maximum size of about 1m.

Blue Groper love sea urchins, as most people would know. Please do not kill sea urchins to feed to the Blue Groper, no matter how tempting it may be. The sea urchins have their place in the reef ecosystem too. They also eat small crustaceans.

SEX CHANGE: The most interesting fact about the Blue Groper is that they start life as females and change into males later in life. So a particular blue groper could breed as a female one year and then the next year turn into a male! Little is known about the factors that trigger this sex change, however it is believed that they appear to change sex when they reach a certain size and age, or if the local male is removed from the reef the next-biggest female will change to a male. It is also believed that if there is an increase in the female population a female may turn into a male if the threshold between the number of males and females is exceeded.

REPRODUCTION: The Eastern Blue Groper spawns over three months, starting around July and finishing up around October. 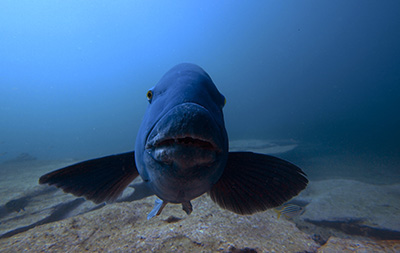