If you are looking for a smooth and uncomplicated way of moving through the water, using as less energy as possible then Choose Atomic Aquatics Split fins.

Atomic Aquatics Split Fins are designed to make it easy and relaxed to move underwater. The split fins will make it super easy to move your legs underneath the water.

The Atomic Aquatics Split Fins have been designed to keep a strong core with Power Rails and Power Plates to ensure a strong design and let you move through the water as efficient as possible.

Why SplitFins deliver more propulsion with less air consumption
All it took was watching the tail fins of fish – except that we couldn't keep up with them because our traditional fins took too much effort. Using hard kicking paddle fins can result in leg strain, fatigue and cramping. Because of the kick resistance of a paddle fin, divers often “felt” like they were moving fast. But underwater speedometers proved that these divers were actually moving relatively slow. SplitFins deliver more propulsion with less drag and kick with less effort. Reducing the stress and strain of the kick results in greater sustained speed, power and comfort. Independent testing has also confirmed that the SplitFin design significantly reduces air consumption.

Not all SplitFins are the same.
Splitfins come in a variety of shapes, sizes and stiffness. These contribute greatly to overall comfort and performance. A fin with short, soft blades will kick easier than a longer, stiffer one, but will require many more kicks to travel the same distance. A blade that is too stiff will require too much effort to kick comfortably. The Atomic SplitFins were specifically designed to optimize all these variables. They are easy kicking fins that deliver high thrust, speed, and efficiency with a comfortable, low frequency kick cycle. 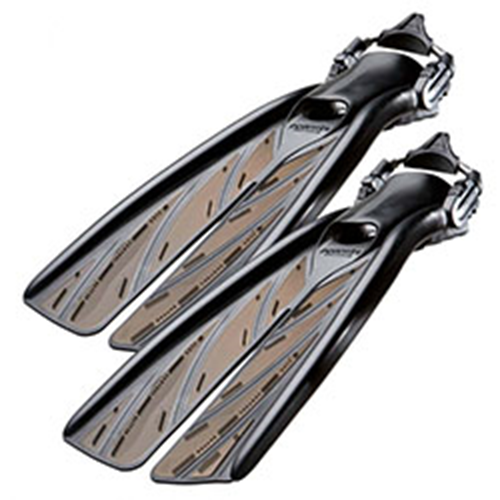