The Pressure Of Filling Tanks 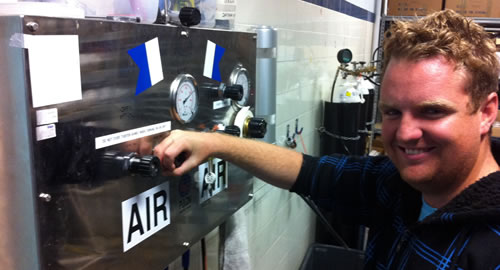 ix months ago when I was an Open Water student I remember watching the instructors at the filling station and thought to myself, Wow that looks so complicated! All those hoses, valves and pressure gauges, just didn’t seem to make any sense. I’d stare and watch with a dumbfounded look on my face because of the complexity of the task. I had thought I would never be able to do it…

Now as an Instructor, it was my turn to tackle the task and learn how to fill tanks…

After a detailed explanation and practical teaching session showing me how to use the fill station, it was now my chance to put what I have learned into practice. So with the lesson now over, I was all alone with what seemed to be an endless sea of tanks. There’s always a rush of excitement learning something new, especially if it involves diving… so I was as keen as ever to get started. When my instructor left the room, leaving me to continue to practice, I was left standing at the same filling station with the same stupid dumbfounded look on my face. Damn, it still looked complicated, but now I had more of an idea of what I was doing.

So I pick up my very first ‘solo’ tank to fill (Without the direct supervision of the instructor) and connect it to the whip. I thought I would begin doing two tanks at a time; start small and work my way up… easy right? Without thinking, I started to connect it all up, tighten the seal and turn the fill panel on. The pressure built inside the tank as it began to fill. Then BANG!!! Out of nowhere the O-ring extruded and high pressured air was going everywhere. It rushed out with a deafening bang, the tank went underwater and now there was water flying around the room from the whip. Still with an ear piercing screech from the high pressured air, I started to freak. It must have looked very dramatic with water flying everywhere and me trying to grab the tank and turn it off. It was like being in a wind tunnel. My instructors, Carl and Peter ran back in from the front of the training facility and quickly stopped the mayhem. Carl smiled and looked at me, saying… “Rookie tank filler”. Hahahaha.

My instructors explained the problem to me. I actually hadn’t created an effective seal between the tank valve and the fill whip causing the O-ring to extrude and high pressure air to escape everywhere; such a rookie mistake. Shaken up and now nervous they allowed me to continue. Now, I was ever so careful with every tank I was filling. Trying not to shake from this frightening ordeal, I powered away filling the rest of the tanks. I’m glad this had happened to me in such a controlled environment; I will never again make such a silly mistake. Now I double, triple checking everything… twice… lol.

After filling the rest of the tanks that were there, it started to become second nature to me. I began to get faster and faster without thinking, and everything was getting done quickly. Now I look at the filling panel, with no dumbfounded look upon my face, because I understand everything and it is all familiar to me. Believe me, It is not complicated at all.

Now I know how to deal with the pressure of filling tanks.

Can I Use My Scuba Diving Wetsuit For Freediving?

How To Develop Your Finning Technique